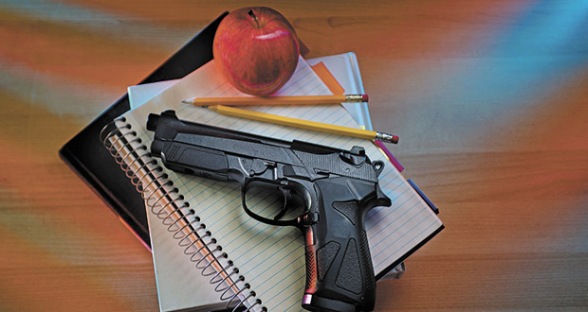 I’ve rewritten this piece in my mind repeatedly trying to discard phrases like “monumentally stupid” and “moronic”  After all, I know there are some very fine people on both sides of the gun debate, and some friends of mine who I love and respect have expressed that they feel this is a good idea.

Clearly, I do not.  First of all, the shootings at Parkland were horrific, and I applaud the activism that they have spawned.  But, since that horrible day, hundreds of Americans have lost their lives to gun violence.  I fear that the conversation in some quarters has narrowed to school shootings, and that we are in danger of losing focus on the bigger issue of gun violence nationwide.

But let’s look at the school safety suggestion that Trump has championed.  If we are going to give teachers “a little bit of a bonus”, a gun, and a training course, we are going to make a massive, nationwide investment that does absolutely nothing to further the education of our kids.  One estimate suggested that if we selected just 10% of teachers to train and arm we would be talking about 1.4 million educators.  How can we justify the money that it would take to fund such an effort when states, even in a booming economy are not funding schools adequately?

His other proposal is to “harden” school sites making them more inaccessible to active shooters.  Apparently he used the word “harden” over twenty times in one statement although there were no particular details on what that would mean.  Students absolutely need to feel safe, but they also crave a warm, caring environment, not one that feels like a prison.

Here’s the other thing that I can say with some certainty as a former high school teacher.  You can give me a gun and give me some training, but as much as I love and would want to protect my students, I sincerely question my ability to draw down on someone, probably a young person, and execute them.  Clearly in the Parkland shooting, trained deputies had the same problem.  Well-trained and adept soldiers sometimes never recover completely from killing another human being.  I can’t imagine that teachers would be very good at it.

The focus on school shootings, long overdue no doubt, ignores that mass shootings are happening in the streets, in our churches, in movie theaters, in night clubs and at concert venues.  How are we going to “harden” our churches to make them more safe?  Are we going to arm and train pastors, the kid who sells you popcorn at the movies, bartenders, and concert security guards?  Do we really want pistol packing preachers?  Do you want to go to the movies knowing the teenaged usher may be carrying a Glock under his jacket?  We have to think about the problem more globally.

I’m not sure why I would bother to end this by making suggestions of what should be done.  We all know exactly what Congress will do about this issue: absolutely nothing. So rather than reiterate the same proposals that come up after every new outrage (banning assault weapons, limiting the size of ammo magazines, or creating a truly efficient method of background checks) let me suggest just one thing.

Make owning a weapon more expensive.  Slap a 25% surcharge on every gun and every bullet sold in America.  Say to people that no matter what the NRA tells you, no one is coming for your guns.  However, if you really want it, you’ve got to pay more.  The government could collect this surcharge and put it to any number of uses.  We could create a fund for the victims of gun violence.  We should absolutely fund research into gun violence as a national health problem as soon as Congress removes the ridiculous law that bans such funding.  We could provide free gun locks to any gun owner who wants one.  Hell, let’s give every gun collector a free gun safe.  Then maybe we could prevent a few first graders from accidentally shooting their playmates on the playground of their “hardened” school campus.

There is plenty of precedence for this approach.  We do the same thing with tobacco.  If your product creates a burden on society, you have to pay more to help offset that burden.  Tobacco taxes are used to help fund anti-smoking campaigns and study the effects of the way in which tobacco is marketed.  No one is ever going to take away smokes from those who want to use them, but when your pleasure becomes a burden on society, you need to contribute to easing that burden.

Let’s at least try this before we become Fortress America and turn every school into a Green Zone.

Since the election of November 2016, I’ve really tried at times to insulate myself from the news simply because there seems to be so much happening that tears at my heart when I see the direction in which our country is being led.  That direction seems to be so dedicated to abusing the interests of people in need, the disenfranchised, and the environment that it is painful to read about.

One glimmer of hope is that I know I am not alone in noticing.

So, I have returned to reading the paper with my coffee in the morning and steeling myself against the worst of the news I might face.  Today was a pretty bad day.

The despair:  There is a lot to hate in this budget.  It seems to slash at the programs that help people the most.  Just to point out two things.  It proposes cutting the budget of the Environmental Protection Agency by over 20%–you know, that little department that until recently worked really hard to make sure that we had clean air and clean water?  That ensured that we would move forward toward a future of sustainable, renewable energy?  That we would support world-wide efforts to battle the causes of climate change?  By contrast, the budget increases spending on the military by 13%.  That is a whopping increase, and it is hard to buy the argument that somehow Obama “hollowed out” our military preparedness when the previous budget exceeded the military budgets of China, Russia, Saudi Arabia, India, France, Britain, Japan, and Germany combined.  To help pay for this enormous increase, the proposed budget suggests cutting the food stamp program.

The hope:  Congress has ignored most of the draconian cuts to social programs and even made substantive increases in health care and other services, but they will wrap themselves in the flag and pass the military budget with no questions asked.

The despair:  Betsy DeVos and Jeff Sessions are at it again, rolling back protections for trans students to use the bathroom that corresponds with their chosen gender identity.  It seems this decree only helps adults who are made uncomfortable by the existence of trans people and fervently hope they will just go away.  Living in California where gender-neutral bathrooms in most public spaces are becoming the norm, their action does little harm.  However, it once again, codifies this administration’s hostility toward the LGBTQ community.

The hope:  It will take years, as it did for gay marriage, but stronger legal protections for the trans community are coming.  We will have to wait for the Trump aberration to pass and for societal attitudes to evolve, but I believe that I will see it in my lifetime.

The Headline:  Woman, 84, Held Over Gunshot

The despair:  Yeah, just in case you missed this one, in rural Northern California an 84-year-old woman was arrested after she took out her rifle and shot in the direction of her neighbor’s 8 and 10 year-old children because they were being too noisy.  Apparently the kids were riding motorcycles and after arguing with the parents, the woman got her rifle out and took a couple of shots toward the kids.  No one was injured.

In an effort to gain some wisdom by stealing from the best, I am currently reading The Book of Joy, a conversation between the Dalai Lama and Archbishop Desmond Tutu as recorded and stitched together by author Douglas Abrams.  Abrams poses the question how one should cope with the despair that many people feel with all of the injustice, and pain, and suffering that we see in the world.  The archbishop responded this way:  “Despair can come from deep grief, but it can also be a defense against the risks of bitter disappointment and shattering heartbreak.  Resignation and cynicism are easier, more self-soothing postures that do not require the raw vulnerability and tragic risk of hope.  To chose hope is to step firmly forward into the howling wind, baring one’s chest to the elements, knowing that, in time, the storm will pass.”

I like that he asks me to embrace hope as an active, vital, and valiant choice. It is a choice made by a warrior, someone ready for action now, but also confident in the good things that the future will bring.