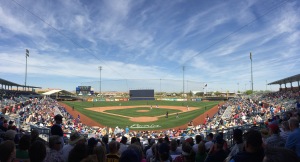 It was a hot, windy day in the Arizona spring, but it felt glorious to Jesse Ramirez as he jogged out to his position at shortstop–getting the start today, his first start so far in his first spring training.  Just ten months out of high school, Jesse knew that while the games were just exhibitions, they were also auditions.  Every play that he made, every hit he collected brought him that much closer to the big leagues—to getting to play before thousands in parks that were like palaces, to being paid a king’s ransom for playing the game he loved so much that he would play it for free.

It was a Sunday and the park was filling up quickly with baseball fans decked out In their team jerseys and summer wear.  Jesse looked out at the grass beyond the outfield, teaming with folks spreading out blankets and lawn chairs, filling up every available space.  He had never played before a crowd like this.

They warmed up with throws to the first baseman, while the pitcher, Rich Davies, took his warm-up tosses.  Jesse marveled at the smooth field and the manicured lawn, a lustrous green, easily the nicest field he’d ever played on.  Even in spring training, the facilities were so much more deluxe than anything he’d ever seen.  His long, lean body felt loose and easy in the heat as he stooped to sweep up the easy grounder thrown to him, moved to his right and unleashed a bullet throw back to first.

Warm-ups over, he jogged over to the second baseman, Roberto Morales, to check on signs. Robbie was the team’s regular second baseman, a three-time All Star and last year’s batting champion.  Jesse felt starstruck with the idea that he was going to be sharing the same field with him for the next couple of hours.  Everyone in the line-up was, or had been at one time, a major league starter except for Jesse.  He’d been called up from the minor league fields when the regular shortstop went down with a leg injury.  He knew he was lucky to be there.

He and Robbie turned toward the outfield to go over the signs so the opposing team couldn’t see or hear them.  “Let’s keep it simple, kid,” said Robbie.  “If the runner’s black or brown, you cover second on the steal.  I’ll cover on the white guys.  OK?”

Jesse thought maybe he was being pranked and hesitated as he saw the smile in the veteran’s eyes.  “Relax, kid.  It’s just practice.  Let’s have some fun out here today.” Jesse breathed and tried to relax.

Robbie grabbed him by the jersey, pulled him close and smiled.  “Hey, kid, the word is you’re good.  So, have some goddam fun and show me something today, OK?”  Robbie turned and jogged back into position as the pitcher groomed the dirt in front of the rubber and dug in to face the first batter. “Come on everybody,” he yelled to the team and the fans, “let’s play two!”

Rich went into his wind-up and fired a scorching fastball toward home plate, but the lead-off hitter was primed for it and lashed a liner to center for a single.  Davies stood on the mound, hands on hips and cursed as he waited for the ball to be returned.  Robbie grabbed the relay and tossed it to him.  “Come on Richie, shake it off man.  Get this guy. Show us some of that nasty stuff you got.”

Jesse marveled at Robbie’s easy command of the infield.  His words seemed to settle the pitcher down, who completely baffled the next hitter with his fastball, sinker, slider combination and struck him out swinging on three pitches.

The catcher fired the ball down to third on the strikeout and it made its way around the infield and back to the pitcher on the mound. “That’s what I’m talking about,” chattered Robbie.  “Now throw us a ground ball, Rich.  Jesse and I wanna turn two for you.  Double play. Look sharp, Jess.  Comin’ to you.”

Robbie waved him a couple of steps deeper into the hole at short.  The batter was the opposing team’s best hitter, and he took a fierce swing at a slider in the dirt for strike one.  Rich threw a high fastball for a ball on the second pitch, and then a tight sinker right down the middle of the plate.  The batter jumped on it, but the ball had faded down just enough that he got his bat on the top half of the ball and hit a scorching grounder up the middle headed for center field.

Even before the crack of the bat, Jesse could see that the ball would be headed deep to his left. He launched himself as he watched the ball come off the bat, and felt the game slowing down for him.  Without thinking really, he performed a quick calculation of where he needed to get to in the next split second, juggling what he could see, with the sound of the ball coming off the bat, the effort behind the swing, the initial trajectory of the ball.  “I’ve got this,” he thought. He could see the intense topspin of the ball and knew it was going to dive into the turf, pick up speed and likely skim the surface of the grass.  In mid-stride, he adjusted slightly and dove, his eyes glued to the ball now, seeing the red stitches swirling over the pristine white rawhide as he extended his long frame and watched the ball slide into the webbing of his glove.  As he rolled on the turf, he caught a freeze frame picture of the motion on the infield: the umpire moving into position, both Robbie and the runner converging on the second-base bag.  With no time for a decent throw and the ball still in his glove, he flipped it toward second base putting a tantalizing arc on the ball, like an alley-oop pass in basketball, sending it toward the empty base.

And in a blink, Robbie simultaneously snared the ball out of the air with his bare hand, tapped he bag with the toe of his cleat, leaping and turning his body in mid-air as if weightless before whipping the ball over to first.

The two umpires called “Out!” almost simultaneously and the crowd was on its feet delighted to see such an acrobatic, highlight-reel play before they had even finished their first hot dog.

Jesse popped up and dusted off his uniform as he trotted back to the dugout.  Robbie fell in beside him and they tapped gloves.  “Yessir, my man.  Now, that was something.  That was something right there.”

Jesse accepted the high-fives and fist bumps as he came in the dugout.  Most of the guys called him “kid” or “buddy” or “rook” as they congratulated him because hardly anyone knew his name.  He sat on the bench next to Robbie waiting for his turn at bat.  Robbie draped his arm around Jesse’s shoulder and leaned in closely.  “Today,” he said, “these boys don’t know your name.  But someday they will.  I can feel it in my bones and my bones, they never lie. These boys are gonna know your name.”