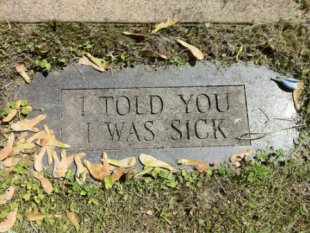 I’m not a hypochondriac.  At least, I don’t think so.

But at 61, I have several chronic conditions (TMJ, upper neck and back pain, anxiety) and then other issues that make guest appearances from time to time (vertigo, extra heart beats, random muscle pain and spasms). I go to the doctor if something seems unusual, or if I suspect they might have some treatment that will improve the chronic ones but other than that, I just try to enjoy the fact that basically, I’m pretty healthy.

However, if several of these symptoms show up at the same time, say vertigo, a restless heart, and a little chest tension, then, of course, my anxiety shoots up and I start getting worried—which makes everything worse.

I’ve had enough false alarms that I’m wary of rushing off too quickly to the doc. I have learned not to call the Kaiser “advise nurse” because no matter how benignly I might describe my symptoms, her solution is always to send me to emergency room hell. I also NEVER Google a symptom. There is no quicker way to be sure that you are dying of some heinous disease, than to plug in a couple of symptoms and let a multitude of websites guess at what you might have.

Because the neck pain drives me crazy, I take ibuprophen every day. I’m confident (because I’ve read the warnings on the side of the extra-large bottle) that eventually my stomach will explode because of it. So when I started to develop a chronic pain on the right side of my abdominal area, I decided to go in to see my doctor. I explained my concerns about the ibuprophen destroying my stomach, and he told me straight out that that was not the issue since my stomach is on the left side. The right side contains the pancreas, liver, and spleen. Great, I thought, now I’ve got three critical organs to worry about.

After reviewing my blood work and doing a physical exam, he told me that he was pretty sure I had something called “abdominal wall pain” which sounded like something that doctors say when they have absolutely no idea what is wrong with you. He reassured me that he had eliminated 95% of the “really bad stuff” and that this diagnosis really did make the most sense. To eliminate the other 5%, he could order up an MRI and blast me with lots of radiation. I decided that I was OK with 95%.

During the exam, though, he introduced me to an interesting bit of doc-speak. He told me that he understood my concerns and my desire for him to be thorough, and that every doctor has to evaluate his patient’s “tolerance for uncertainty” in making a diagnosis. I now know that my “tolerance for uncertainty” is 5% or lower. If I’m 6% uncertain, I’m going to want to full monty of tests, radiation be damned.

However, my tolerance was sorely tested on Christmas Eve this past year. After our usual wonderful meal and as the family celebration was continuing, I excused myself to go to the restroom. Imagine my surprise when I discovered my urine had turned pink. Blood in the urine! This can’t be good. Either my stomach had finally exploded or something was surely wrong with my pancreas, liver, and spleen now that I knew for sure where they were.

I could not rush off to the emergency room on Christmas Eve even if it meant having my kids watch their dad slowly bleed out as we drank beer and watched “A Christmas Story.” I calmly told my wife, and she agreed that I should monitor the situation and as long as I wasn’t in pain, we could get it checked out later. By noon the next day, the symptoms were gone and all that was left was that nagging worry that at any moment, I could go critical again.

I waited until December 26th to go in to see an urgent care doctor and recounted the series of events and my various theories, all of which he kindly discounted. In fact, he seemed intent on assuring me that he was in far worse shape than I appeared to be. He asked me a long series of questions, none of which led to a conclusion. Finally, he paused and asked, “Did you eat anything unusual?”

Beets. Mary had made a beet salad from fresh beets and I ate it to be polite and because I read somewhere that purple food is good for you. I don’t even like beets. No one had ever told me that fresh beets, eaten in large enough quantity, will color everything that passes through your body for about 8-12 hours. Sure, ibuprophen has warning labels, but not beets.

So, am I a worrier—yes. Possessor of a 5% tolerance for uncertainty level—absolutely. Anatomically ignorant—check. Hypochondriac?—Hmmm. Still not sure. I think I’ll wait until the next time I’m nearly killed by a vegetable to decide.

4 thoughts on ““So, Hypochondriacally Speaking…””