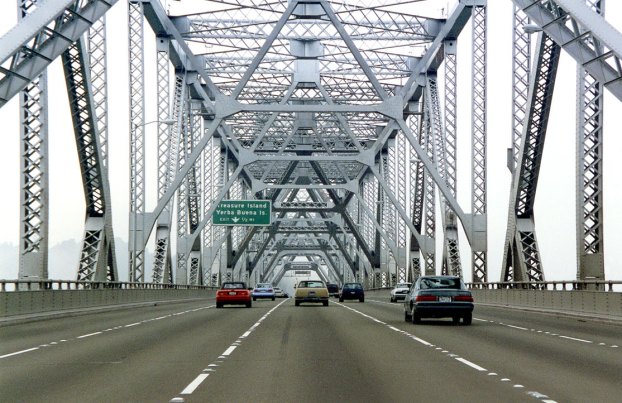 5.  Dying as a result of mere inattention either by me or some other idiot.

4.  Dying while trying to fix my own plumbing or electrical problem.

3.  Dying at the hands of a crazed, spandex-clad bicyclist.

2.  Dying slowly of some kind of progressive, degenerative disease.

1.  Having to drive my car over a bridge.

Clearly from the list above, mortality is on my mind, as I imagine it is for most members of the over-60 club. The good news is, when you join the junior geriatric set, you get an increasing number of discounts. The bad news–you don’t get to enjoy them for all that long.

Death, however, in all its bizarre and mundane forms, still seems very abstract to me. I do not worry that I am going to die—that much is certain. However, how I go about dying is of much greater concern to me.

The difference between fears 2-5 and #1 is that the former are all somewhat existential concerns that don’t cause fierce heart palpitations, hyperventilation, and a desire to leap out of my car when I am faced by them.

I used to love to talk with my students about their various phobias. I was surprised to find out how many were still living with what we think of as child-like, boogieman fears. It was a revelation when one girl offered that as she prepared for going to bed, she would turn off the room light and leap into bed from the spot of the light switch. For years, when the subject of fear would come up in class I would share that story and always find others who still, even as 17 and 18-year-olds, practiced the same behavior.

I don’t remember many of the fears I had as a youngster or an adolescent. However, I do remember when reading the novel The Exorcist late into the night, I reached a point where I simply could not turn another page. I put the book down, and sincerely prayed that none of the evil spirits that I was convinced were now swirling about me would invade my body and turn me into a head-spinning, projectile-vomiting creature.

And, of course, I was fearful of having my adolescent heart crushed by someone like Theresa, a girl that I met when I was a sophomore and developed a huge crush on. We worked together on a project and I convinced myself that I was somewhere in her league—convinced myself so much that I finagled an invitation to her house on or about Valentine’s Day and gave her a gaudy, Hallmark V-day card. I met her mom, and she seemed happy that Theresa was “dating” a “nice boy.” Theresa traded on that impression to get her mom to let her to go to a dance with me. I was over the moon about the whole thing and still wondering at my luck as we entered the gym and she quickly informed me that she hoped it was OK with me if we didn’t stick together for the whole dance, and before long, she disappeared. She was kind enough to make sure she got back with me for the final slow dance and she managed somehow to hold me closely enough that it almost made up for the whole, slow burn of humiliation that I had felt during the night.

But these are all fears that I would think of as being common human experiences, just as I think we all worry about the onset and manner of our eventual deaths. It wasn’t until I was fully adult that I discovered the white-knuckled, heart-pounding, breath-taking fear that came on me unexpectedly when I was doing something as simple as driving over a bridge.

I don’t exactly remember when I discovered that I had gephyrophobia –yes, it actually has a name. For me, it is truly the mother of all completely irrational fears. I had a hint of it the first time I drove up to Carmel and my new bride and I took the scenic Hwy 1. I could not relax once in that three-hour stretch as I hugged the north-bound lane and hoped to God I wasn’t about to plunge over the all-too-close cliffs and down to the rocks and ocean below. 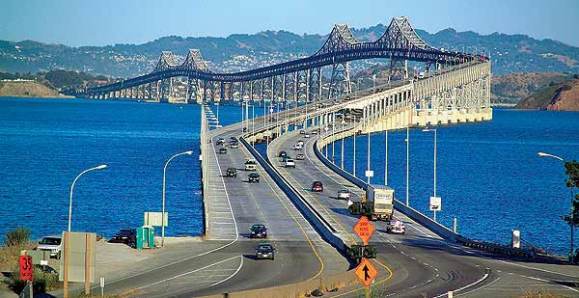 I do remember that it became an issue for me when we were headed home from a trip to the Napa/Sonoma area. Heading back toward Oakland, I was totally unprepared for the Richmond-San Rafael Bridge, which as I approached, began to look like a piece of ribbon about six inches wide. As the bridge shrunk in size it also took on the appearance of a huge roller coaster ride that I had not signed up for. Suddenly, I couldn’t grip the steering wheel hard enough, as if at any moment some (Exorcist-like) force would make me veer off, break through all of the guardrails and send us to our deaths. I tried to find a lane that felt comfortable, crossing back and forth without consulting my mirror or using my signals. I did not give a flying fuck about anyone behind me. I was in full-blown panic mode and was trying to find any comfortable space where I could survive the five minutes it was going to take me to get across this span.

Of course, a fear like this feeds upon itself. I started to study maps of our driving trips and if I spotted a bridge crossing, I’d worry about it for days. Often the bridge would be so short and flat that I’d be over it before I would even notice but one successful crossing did not breed confidence. Once when I was at a conference in Palo Alto, I wanted to go over to Oakland to visit with my son who was living there at the time. To get there, I would have to cross the Dumbarton Bridge or take a very circuitous route through San Jose. I actually looked up the bridge using Google images to find a picture of this beast and see if it looked passable. I made it, back and forth, but not without a lot of concentration and deep-breathing exercises.

This means there are a lot of cities I will never live in. San Francisco, New York, and Seattle come to mind right away. We are currently planning a trip to the Adirondacks and there is just so much water there. I don’t even want to look at a map and start thinking about it.

I’ve come to realize that it is bigger than just bridges. I don’t like to be near the edge of the abyss. If I can see a dramatic drop-off, I start to panic. I don’t like mountain driving, or even hiking on a narrow trail with a steep drop. Strangely, I have gone para-sailing without incident and stared over the edge of the observation deck of the Empire State Building without any problem. I suspect that I could do a parachute jump although I have not yet taken that one on.

There is something about being near the edge though, that continues to haunt me. Maybe that drop-off is somehow metaphorically connected in my mind to the Abyss with a capital “A”—the fear of death that permeates the other four of my top five fears.

Or maybe I just hate bridges and will assiduously continue to avoid them at all costs.