I thought there should have been fireworks.

Six weeks ago, my wife and I walked into our credit union late in the afternoon, waited patiently for a teller, and then told her we wanted to pay off the balance of our mortgage loan.

It was not a spontaneous decision.  I had begun planning, over a year ago, to begin making double payments and make a push to get the final payment made in November, thirty-seven years (almost to the day) after taking out our original loan.

I guess the confetti canons and bubble machines were in storage because rather than celebration what we got mostly was confusion.  The young teller had to call over a supervisor.

“He wants to pay off his mortgage.  How do we even do that?”  She was staring diligently at her computer looking for the “paying off the mortgage” icon.  It wasn’t there.

The supervisor only knew that they needed to call the loan servicing department to ask them what to do.  Apparently, this happens so seldom, they just aren’t very familiar with the process.  We finally jumped through all of the hoops and settled up with them.  They were very happy for us and offered their congratulations.  I just had one question.

“Don’t I get something that says that I now own the house–sort of like the pink slip on a car?”

There was a hesitation.  The supervisor jumped in with, “Yes. The loan department will send you something official in a few weeks.  I’m pretty sure.”

I chose not to worry about the details. I had an expensive bottle of champagne chilling at home and was anxious to get back and sip it slowly with my wife and savor the moment.  There was a feeling of satisfaction, something akin to the feeling I had in seeing each of our kids graduate from college knowing that my wife and I had found a way to make that possible without sinking them or ourselves into debt.

Our home is a modest 3-bedroom house in a suburb of San Diego.  We bought it in 1980, a spec home that was immaculate on the inside and barren of any kind of landscaping on the outside.  Getting the yard fully landscaped has been a 37-year pain in my ass that still goes on today as I tackle previously untouched areas and try to revitalize parts that need re-landscaping.

However, every day I can enjoy my three towering pine trees planted early on from one-gallon containers, mere twigs that I stuck in the soil some 35 years ago.

And there are 20 relatively new iceberg rose bushes that now rim our lawn, the same lawn that provided room for softball and soccer practice for so many years.  I visit my vegetable garden every morning, which produces year-round now that I’m retired, and marvel at the beauty of home-grown food.

The inside of the house seemed firm enough when we bought the place but turned out to have a certain elasticity to it that I could not have imagined back in 1980 when Mary and I moved in.  It seemed huge at the time–3 bedrooms, 2 bathrooms, a living, dining and family room with a two-car garage just for the two of us?  Are you kidding me?!

Then in ’82 when Nico was born, it got a little smaller, shrunk a little, now having this tiny person sleeping across the hall from us.  When Emily came along in ’87 our study evaporated and the house continued to contract as the kids grew bigger and simply sucked more air and space out of the house.  We nearly reached critical mass and thought long and hard about moving to a bigger place, but decided to sit tight and wait for the kid’s planned exits to college to give us more space again.

And the magic happened.  Nico headed off to UCSB in 2000 and Emily departed for UCLA in 2005, and late in the night I could actually hear the house give off a sigh as it stretched and once again grew to the size it had been when we first moved in.

So yesterday, when I sat down to do the bills, for the first time since I moved out of my parents’ house in July of 1973, I had no one to whom I needed to give money so that I could continue to live in my place.  It truly was my place for the very first time. 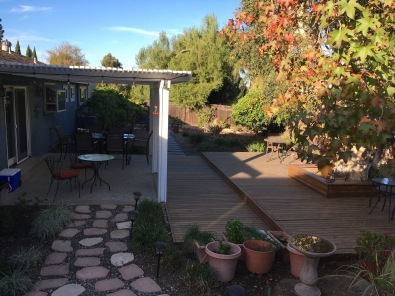